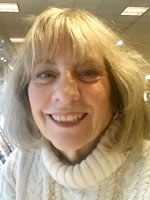 Mary Helen Fein was born in Riverdale, New York, in 1943. Her father was from a large New York family, and in 1939, he was the first Jewish boy to attend Georgia Tech. At school in Atlanta, he met Mary Helen’s mother, a beautiful 16-year-old Atlanta girl. Upon his graduation, they married and moved to New York. Mary Helen was born soon after. She attended schools in New York, and she has a B.A. in English Literature from Temple University, an MS in Computer Science Engineering from the University of Pennsylvania, and for two years, she studied painting at the Pennsylvania Academy of Fine Arts, America’s oldest art school.

Today she lives in Northern California where she designs websites, writes, paints, and draws. Mary Helen is a Certified Zentangle Teacher and holds small classes in this meditative art form. In addition, she spent five years in multi-year programs/classes at Spirit Rock Meditation Center. The classes included studying Buddhist teachings and developing Buddhist practices. Due to her work in these classes, Spirit Rock has authorized her to teach Insight Meditation. She is active in her local Buddhist community, Mountain Stream Meditation, and serves as President of their non-profit Board of Directors. In addition, Mary Helen volunteers for Bhikkhu Bodhi’s world-wide non-profit, Buddhist Global Relief.

Mary Helen is a Community Dharma Leader and and often gives talks and leads sitting groups and meditation classes for Mountain Stream Meditation.

In the summer of 2020, Mary Helen completed her second novel, Stitching a Life, An Immigration Story. This is an historical novel, based on the life of her grandmother, Helen Breakstone Fein. Helen came all alone through Ellis Island to New York City’s Lower East Side as a young girl in the year 1900. Gradually she worked to bring her entire family to New York. Jews everywhere were flocking to the New World to escape the virulent anti-Semitism of Europe and Russia. Helen worked hard in the garment industry, married her true love, and lived a long and productive life. Her story is the story of how immigrants worked hard and made The United States a great country.  You can purchase Stitching A Life here on Amazon.