Stitching A Life, An Immigration Story 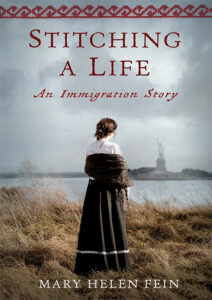 In June 2020, Stitching A Life, An Immigration Story by Mary Helen was published. This is an historical novel for young adults about her grandmother, Helen Breakstone Fein. Helen came to New York City in 1900, alone across the Atlantic at the age of sixteen. She found a place to live with relatives who had come earlier, and she began work in the schmatta trade, New York’s thriving garment industry. Through hard work, and with good humor and great perspective, Helen devoted herself to reuniting her entire family, freeing them from the spectre of anti-Semitism that threatened all the Jews in Europe and especially those in Russia.

One at a time, she sent tickets back to the old country to bring her siblings to New York. With each new family member who arrived, earning power increased and more tickets could be purchased more quickly. Eventually the entire family of eight was reunited in on the Lower East Side of New York City. Helen married her true love, moved way out to the country (now the Bronx) and had eight children of her own.

This is the story of how immigrant families made the United States great. The author hopes this story will change minds today about immigration and help everyone to see how the many races and cultures in the United States enrich our lives today. Stitching A Life was published by She Writes Press .

Stitching A Life is available on Amazon here, in soft cover and for Kindle.

Loss of  Deliverance, A Story of a Young Woman’s Adventures in the Drug Trade 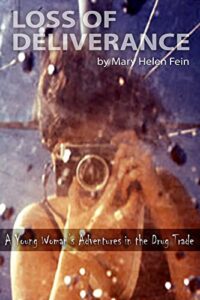 In 2014, Loss of Deliverance, Mary Helen Fein’s first novel, was published. This is a fast-paced story of a young woman who gets over her head in the drug trade of the 1960s. What started out as stimulating excitement gradually turns into danger and exposure.  Eventually she realizes that she is caught up in a harsh world, one that forces her to separate herself from others in a web of lies and complications. She rconcldes that she must change her life. This is the story of how this young woman finds her compass, faces facts, and makes her way into a better life.

This book will appeal to young people finding their way in the world, and to all those who lived through the wild times of the 1960s and 1970s. It’s available on Amazon here.